The majority of Bulgarian citizens polled by the Open Society Institute - Sofia project support the country's accession to the Schengen area, but over time the support erodes and in case of further postponement of the membership there is a risk that it will be lost.

In the framework of a nationally representative survey of public opinion conducted in the field in the period June 6-16, 2022, more than 42% of respondents expressed support for Bulgaria's membership in Schengen, less than 34% were against, and another 24% could not judge or they don't answer the question. Among those who expressed an opinion on the issue, nearly 56% are in favor of membership, and 44% are against it.

The largest share of opponents of Schengen is observed among:

Over time, public support for Bulgaria's membership in the Schengen area has decreased, although it continues to enjoy a majority among Bulgarian citizens. A series of public opinion surveys conducted by the "Open Society - Sofia" Institute in previous years show that the highest support for the country's accession to Schengen was in 2011 (67%), after which support gradually decreased.

Against this background, any further postponement of membership risks losing the existing majority in support of this integration policy.

Do you support Bulgaria's entry into Schengen? 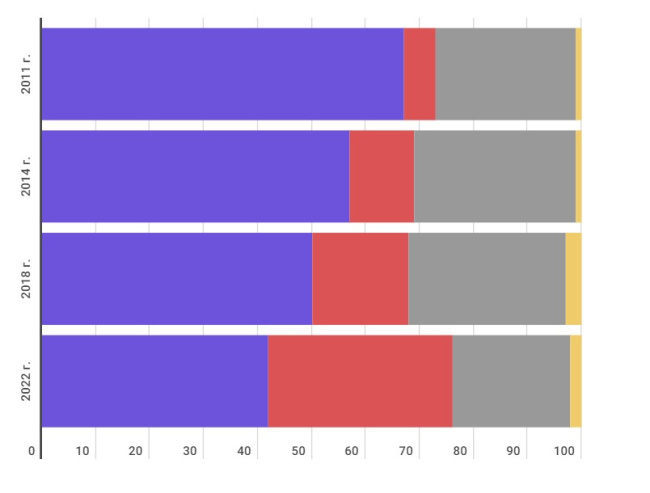 The cited data for the year 2022 are from a nationally representative survey of public opinion, conducted among the adult population of the country in the period June 6-16, 2022, using the method of direct standardized interview with tablets at the respondents' homes. 1000 effective interviews were conducted.

The field study was conducted by "Alfa Research" within the framework of a project financed and implemented by the "Open Society" Institute - Sofia. The question was asked in the framework of a larger study on public attitudes towards democracy, the rule of law and human rights, an analysis and summary of the data of which you can find here.

The cited data for previous years are from nationally representative surveys of public opinion, conducted and financed by the "Open Society - Sofia" Institute in 2011, 2014 and 2018.