Day 286 of the Invasion of Ukraine: Third Russian base hit within 24 hours, this time in Kursk Large parts of Kyiv region will remain without electricity in the coming days, authorities have warned. The reason is again the intensive Russian missile attacks on energy facilities.

The Ukrainian Air Force reported that more than 60 Russian missiles out of more than 70 launched were shot down. The situation with the electricity supply remains complicated. "As temperatures drop, some power plants cannot operate at full capacity," Ukraine's electricity company warned.

Russia blamed Ukraine for the attacks on two Russian military airfields in the Ryazan and Saratov regions. According to the Russian Ministry of Defense, the attacks were carried out by combat drones and took three victims - military personnel. Four people were injured.

Third Russian base hit within 24 hours, this time in Kursk

Third consecutive drone attack on a Russian base within 24 hours. The damaged base is located in Kursk, near the border with Ukraine. A fuel tank caught fire, but the fire was brought under control and no one was injured, UNIAN reported.

Yesterday, Moscow blamed Kyiv for the explosions at the two military airports of Diaghilev and Engels, which are located hundreds of kilometers from the front line. The explosions killed three people and injured four others.

According to Kursk Oblast Governor Roman Starovoit, the midnight drone attack caused a fire at a fuel storage tank.

An oil tanker caught fire near an airfield at #Kursk, #Russia as a result of a drone attack. Now there is a large-scale fire there. pic.twitter.com/rHVy7R9Frp

"An oil storage tank burst into flames as a result of a drone attack near the Kursk airport. There were no casualties. The fire has been contained. All special services are working at the scene," Starovoit reported.

Meanwhile, eyewitnesses reported that the drone attack caused a large-scale fire. Residents of several areas of the city can see the fire from the airport. The Russian Ministry of Defense later clarified that the attack was carried out by unmanned drones, which were subsequently intercepted and destroyed.

Ukraine has not claimed responsibility for what happened, and Kyiv's laconic comment was that it was "karma" as a result of the Russian invasion. Russia responded with a series of massive strikes across Ukraine.

After the first two incidents at Diaghilev and Engels, CNN commented on Ukraine's drone program and the development of longer-range drones. Satellite images on Monday showed Russian military aircraft damaged in attacks on military airfields. Ukraine's Defense Ministry has not officially commented on the explosions so far, and the government in Kyiv has not acknowledged that it has added long-range attack drones to its military arsenal.

The television, however, highlights several messages of the state-owned arms manufacturer "Ukroboronprom" from the last few weeks. Kyiv's gunsmiths have indicated several times that they are close to completing work on a new long-range drone.

In October, Ukroboronprom posted, along with an image of what appears to be part of a drone structure: “Range is 1,000 km, weight of the combat unit is 75 kg (165 pounds). We're putting the finishing touches on it.''

A month later, on November 24, Ukroboronprom published another status: "The next stage of the testing of the unmanned aerial vehicle - On behalf of the Chief of the General Staff, we are preparing for flight tests under the effect of radio-electronic warfare." The photo highlights an inscription on what is assumed to be a drone - the Church Slavonic "аз воздам", i.e. I will render justice.

On Saturday, less than 48 hours before the attacks on the first two Russian airports, Ukroboronprom spokeswoman Natalia Sad was quoted by Ukrinform as saying that "a number of stages of successful tests have been completed."

"In accordance with the instructions of the Chief of the General Staff of the Armed Forces of Ukraine, we are moving to the stage of tests involving an electronic warfare environment," she commented.

Despite these details brought to CNN's attention, there has been no public indication that the drone in question was being prepared for use or was involved in the explosions in Russia since Monday morning, but in any case, the incidents have focused attention in the coming weeks on Ukraine's combat drone development program.

The two bases hit, according to the Russian Defense Ministry, are hundreds of kilometers inside Russian territory and beyond the range of Ukraine's declared drone arsenal. Russian propagandists panicked on Monday with suggestions that on such a scale the VSU could attack objects on the territory of the Russian capital as well.

After the explosions at Russian airports - does Ukraine admit that it carried out the strikes?

Explosions erupted at airports in Ryazan and Saratov regions yesterday. Strategic bombers that are involved in the war in Ukraine and can carry nuclear weapons are stationed there.

Russia says at least three people have died. According to the New York Times, several drones took off from Ukrainian territory and headed for Russian airports.

At least two planes were destroyed at one of the airports, and several other aircraft were damaged. Saratov and Ryazan are located about 700 kilometers by air from the border with Ukraine. 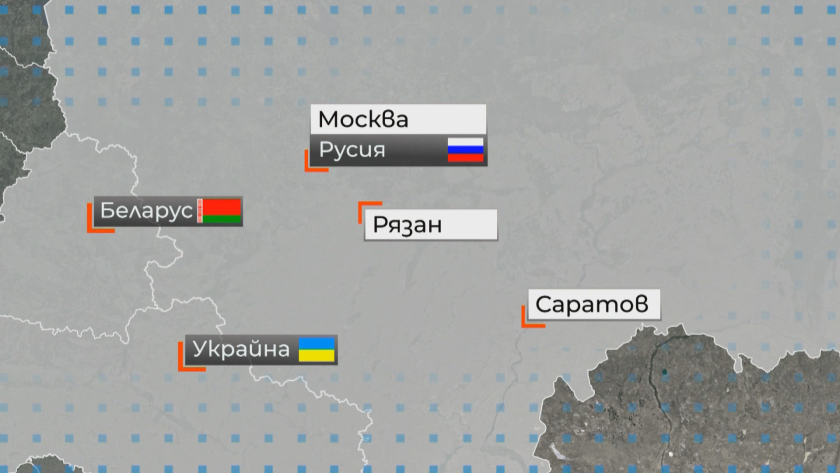 Canada will provide $11 million for demining in Ukraine

The financial assistance is intended to assist in the detection and disposal of mines, destruction of unexploded ordnance and other explosive materials left over from the war.

Exports investigating weapons from the organization "Conflict Armament Research" have determined that at least one of the Russian cruise missiles used in the attacks against Ukraine on November 23 was produced in the last three months, the New York Times reported, quoted by BTA.

Some of the cruise missiles fired by Russia at Ukrainian infrastructure in late November were produced months after Western sanctions on Moscow came into effect to deprive it of the necessary components to make them, according to the investigative group's report yesterday.

Specialists from the UK-based independent organization for identifying weapons used in military conflicts have analyzed debris from rockets that hit the Ukrainian capital, Kyiv. Markings on them showed that one was made in the summer and another after September.

According to a member of the team, the fact that Russia continues to produce advanced cruise missiles like the X-101 is proof that it has found a way to obtain semiconductors and other materials needed to make them, or has had significant stockpiles since before the war.

In four previous visits by a Conflict Armament Research team to Kyiv, equipment such as encrypted radios and laser rangefinders were also found to be assembled with semiconductors imported from the West.

Whether Russia is starting to run out of its old inventory of cruise missiles cannot be said, the New York Times points out. Armies usually first use older weapons in combat before switching to newer ones.

On November 23, the day of the Kyiv shelling, US Defense Secretary Lloyd Austin told reporters that Russia's arms production had been "significantly curtailed" and it would be difficult for it to resume in the short term "due to trade sanctions imposed on microchips and other items".

The head of the investigative team at Conflict Armament Research, Damien Spleeters, believes that it is difficult to say whether Russia is experiencing a shortage of armaments.

"Such claims have been heard since April. We only indicate that the cruise missiles were produced recently, which may be a sign of this, but not definitive proof," emphasized Spleeters, quoted by the New York Times.

VTB Bank has been hit by the biggest cyber attack in its history, Russia's second-largest bank said on Tuesday, warning of temporary difficulties accessing its mobile app and website but assuring customers that their data remained safe.

State-owned VTB said it was repelling a distributed denial-of-service (DDoS) attack, in which hackers try to flood the network with an unusually large volume of data traffic to paralyze it.

"The bank's technological infrastructure has been subjected to an unprecedented cyber attack from abroad," VTB said in a statement, adding that it was "the biggest cyber attack not only this year, but all the time since the bank has been operating."

Russian government entities and state-owned companies have come under attack over the military invasion of Ukraine, with the websites of the Kremlin, flagship carrier Aeroflot and major lender Sberbank among those experiencing outages or temporary access problems, reminds Reuters.

Meanwhile, pro-Russian hackers have claimed responsibility or been blamed for attacks on websites and infrastructure in Lithuania, Norway and the United States this year.

Kremlin spokesman: A ceiling on Russian oil prices will destabilize the world market

The introduction of a ceiling on Russian oil prices will destabilize the world market, but will not affect the course of the special military operation in Ukraine. This was stated by Kremlin spokesman Dmitry Peskov.

He assured that Russia is preparing retaliatory measures to Western restrictions on the price of oil and added: "We will not recognize any ceilings. These measures will clearly affect the stability of the world energy market, destabilizing it completely."

According to Peskov, the Russian economy has all the necessary resources to ensure the continuation of the so-called special military operation in Ukraine.

Deputy Prime Minister Alexander Novak said that Russia would not accept the price cap, even if it had to cut oil production.

He specified that such restrictions are interference in market instruments and therefore cooperation will continue only with those clients who are ready to work under market conditions.

Ukrainian President Volodymyr Zelensky has been named Person of the Year by the British business daily "Financial Times" (FT). On the FT website, a large material about the Ukrainian leader was published, including excerpts from an interview with him.

According to the article, many Ukrainians before the Russian invasion "perceived Zelensky as something of a buffoon - an amateur who could not cope with the responsibilities of high office". "But the 44-year-old politician has earned his place in history with a remarkable display of leadership and resilience," say the FT journalists, who justify their choice by saying that Zelensky has become "a symbol of the global opposition between liberal democracies and authoritarianism."

The FT compares him to Winston Churchill (1874-1965), who led the British wartime government from 1940 to 1945 and also from 1951 to 1955. The FT notes that, like Churchill, Zelensky faces electoral defeat, when the conflict is over. The FT writes that Ukraine is already debating whether a military leader would be a suitable candidate to lead the country in a period of peace. According to the president's former press secretary Yulia Mendel, Zelensky does not have the necessary discipline and experience to successfully lead the country in peacetime.

The newspaper noted that after the end of the conflict, he will have to "answer difficult questions" about why the country was not sufficiently prepared for the confrontation. Zelensky himself told the publication on this occasion that the Western leaders did not share intelligence information with Kyiv about the plans of the Russian troops before the start of the war. "No one has shown us specific materials that say that strikes will come from one direction or another," he said.