Japan made a scintillating comeback to create a massive upset against Germany, defeating the four-time champions 2-1 in the group E match of the FIFA World Cup at the Khalifa International Stadium on Wednesday.

Germany were leading at the end of the first half but Japan scaled up their game in the second half, scoring in the 75th minute through Ritsu Doan and in the 83rd minute through Takuma Asano. Takuma Asano was brought in as a substitution in the 57th minute and proved his mettle in the match as Japanese supporters yelled and cheered from the stands.

The second half saw the Japanese players come with a new fervour, zeal and confidence as they dominated the ball possession and made constant runs to the German box.

Gundogan, who had scored for Germany through the penalty kick in the first half, continued his good form and came very close to scoring in the 60th minute but his the ball ricocheted off the goalpost to huge disappointment of German fans.

Germany ended with superior ball possession and shots on goal but piercing attacks by Japanese team left them vulnerable.

With this win, Japan has got to the top of the table in Group E which also features Germany, Costa Rica and Spain.

Germany were leading Japan 1-0 at half-time after Ilkay Gundogan scored via penalty kick in the group E match at the Khalifa International Stadium on Wednesday.

Japan goalkeeper Shuichi Gonda failed to prevent a goal in the 32nd minute of the match. Gundogan netted the ball straight into the goal through a penalty kick to give Germany 1-0 lead.

The four-time FIFA champions wasted no time and came out all guns blazing as they went deep inside the Japanese box in the second minute of the game and looked threatening from the beginning.

Daizen Maeda challenged German Antonio Rudiger to dribble the ball past him but the centre-back was alert and cut the Japanese' run short.

Maeda was in the reckoning once again in the 8th minute as he made a brilliant run to get to the ball perfectly and score, only to be called off-side.

There was a constant struggle between the sides for possession. Japan also had the advantage for some time.

Germany came close to scoring in the 16th minute with a superb corner kick from Joshua Walter Kimmich that was headed just a few inches wide by Rudiger.

A free-kick was given to Germany as Thomas Muller was brought down by Takefusa Kubo in the 18th minute but the Germans failed to score off it.

Gundogan troubled the Japan team with his brilliant football skill as he managed to constantly find vacant spaces in the field.

The German finally scored via a penalty to give Germany a one-goal lead over Japan.

Japanese players seemed a bit demotivated after trailing and faltered with the ball, giving possession to the German players in the first half.

Germany almost took a 2-0 lead in the closing minutes of the first half after Kai Havertz found the back of the net but was called off-side.

The result of the match was similar to that on Tuesday when Saudi Arabia had shocked fancied Argentina 2-1.

Japan caused an upset much similar to the match between Saudi Arabia and Argentina on Tuesday.

Both Japan and Saudi Arabia came from behind to clinch famous victories against their fancied rivals. 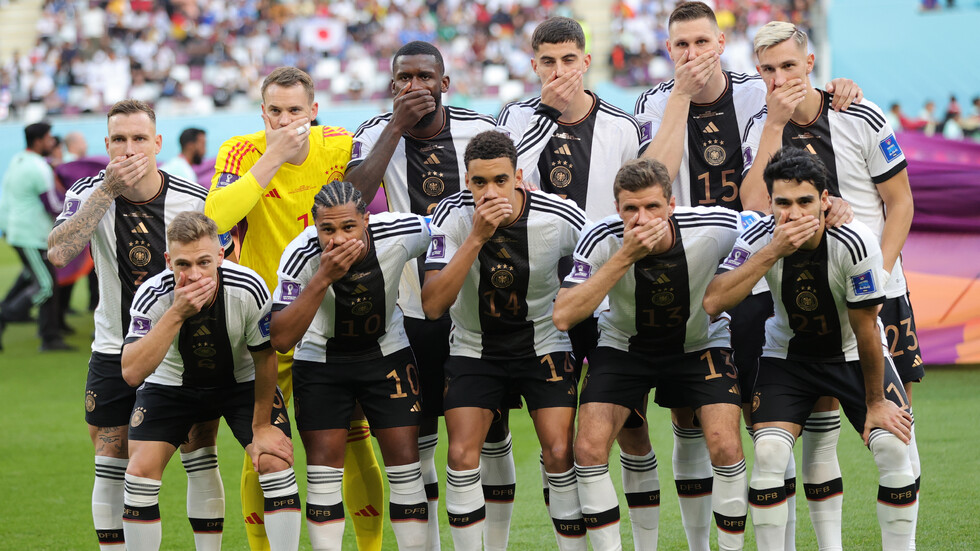 The German national team risks getting into a scandal during the World Cup in Qatar, reports Gong.bg. The reason for this could be the act of the German footballers before the start of the Group E match with Japan.

In the team photo, the Germans covered their mouths with their hands. It was their response to FIFA's threat to punish team captains who wear One Love armbands in support of sexual minorities.

Earlier in the day, the famous German newspaper Bild called on the Bundesstimm to leave the World Cup.

It is not yet clear what the reaction from FIFA will be.