Bulgaria’s President: Elections in March if all Mandates to form a Government are Unsuccessful President Rumen Radev held consultations with "Democratic Bulgaria" of "Dondukov" 2 street. He stated that he is ready to hand over the third mandate after the New Year, so that there are no elections in January and February.

"After the election, I am guided by two main goals. The first is to do the maximum to have a regular government, to give time for dialogue and to give time for the parties to move away from aggressive political rhetoric and to pass important laws. The second an important goal is to arrange the consultations in time and the handing over of the mandates in such a way that if we have a failure and no government is formed, the early elections will not be in the most difficult period - January and February. And this requires an undoubted delay," the president emphasized.

Radev specified that with new early elections, the risk of an even lower voter turnout is real. He emphasized again that he is ready to hand over the third mandate after the New Year in order to have elections in March. "But I strongly hope that it will not reach a third mandate", added Rumen Radev.

The head of state once again noted that along with the most important task - forming a government, the parliament also faces other important tasks - on urgent laws, on the Recovery and Sustainability Plan, on the filling of constitutionally established bodies that work with an expired mandate.

"There are no small and large parties, there are no small and large political forces in the parliament, because the responsibility is common. I follow with concern what is happening in the Bulgarian parliament and it seems to me that this is not what the Bulgarian citizens expect. What we are all waiting for - consolidation to find a successful formula for creating a government to solve the important problems, goes in another direction. In the direction of increasing confrontation, of opposition, of drawing new dividing lines," pointed out Rumen Radev - President of the Republic of Bulgaria.

Regarding the chances of forming a government, Hristo Ivanov pointed out that it can be difficult to form one. And the arithmetic shows that no less than three parties are needed to form a cabinet. 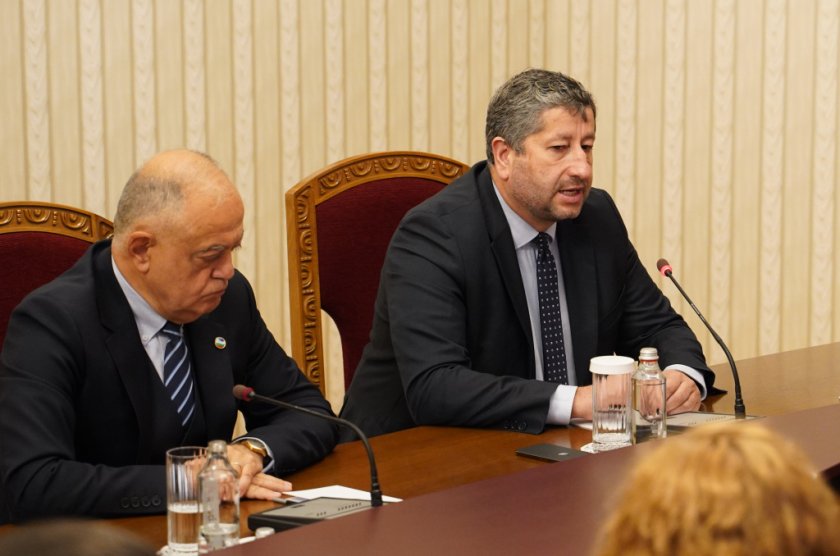 "In order to have a stable government, such setting of priorities and creation of such a structure and atmosphere is required, which assures the Bulgarian citizens that this is not an unprincipled gathering that is there only to absorb power. It is clear that the Bulgarian political system is going to fragment. And we cannot expect, neither in this parliament nor in the following parliaments, the emergence of a single entity that will take all the power in itself. The key from here on will always be dialogue and search for some forms of cooperation. But it is very important that this be unprincipled," said Hristo Ivanov - co-chairman of "Democratic Bulgaria".

According to him, there are three main priorities for DB - judicial reform, a clear attitude to security issues in view of the conflict in Ukraine, and a reasonable economic course aimed at taking care of those who need help, but also conditions for growth, investment and competitiveness.

So far, the head of state has held consultations with the largest parliamentary group, that of GERB-SDS. Talks were also held with "We Continue the Change", as well as with DPS. There was also a conversation with the groups of "Vazrazhdane" and BSP.

Radev gave a promise that he will carry out the procedure to the end and give enough time to the parties until they have exhausted all possible options in search of a consensus to form a government.

Hristo Ivanov: We must make efforts for a government of reforms, not revenge

“It is obvious that an election in March is much better than an election in February or January, but efforts must be made to have a government that can be on reforms, not a government of revenge.” This was stated by the co-chairman of "Democratic Bulgaria" Hristo Ivanov after the meeting with the president.

"I don't see anything obvious about what will happen with the third mandate, and let's not rush to the wind. We will comment on possible relations for the third mandate when the time comes. Let's see what will happen with the first mandate, whether GERB will form a coalition for the rematch even then , let's see if with the second mandate a reform administration can be formed," he pointed out.

Ivanov commented on Boyko Borissov's invitation for negotiations regarding the Electoral Code, stating that these talks should not be held for just one week.

"Mr. Borissov and all of us are calling for a dialogue, but a dialogue on the reform of the electoral process for a week does not seem serious to me. I do not exclude any arguments and directions of conversation, but we must conduct it in a serious way".

"Democratic Bulgaria" and the president have not talked about vetoing the changes to the Electoral Code. Hristo Ivanov defined it as unfortunate that during the consultations they mainly talked about the weapons for Ukraine.

"It surprised me because our differences are known, our positions are public. This clarification of relations seemed unfortunate to me, given that people expect us to talk about forming a government. Sometimes there are more emotions," he said.