Thousands Protested in London demanding Britain return to the EU Thousands of protesters marched through central London on Saturday calling for Britain to return to membership in the European Union, DPA reported, quoted by BTA.

On the National Rejoin March, large crowds marched from Park Lane to Parliament Square. Marchers from across Britain traveled hours to attend.

In the garden of Parliament Square, the rally's final stop, a sea of ​​blue and yellow was seen as supporters waved EU flags and carried placards.

Some of the posters read: "Brexit would have never worked out" and "For lower bills #rejoinEU". 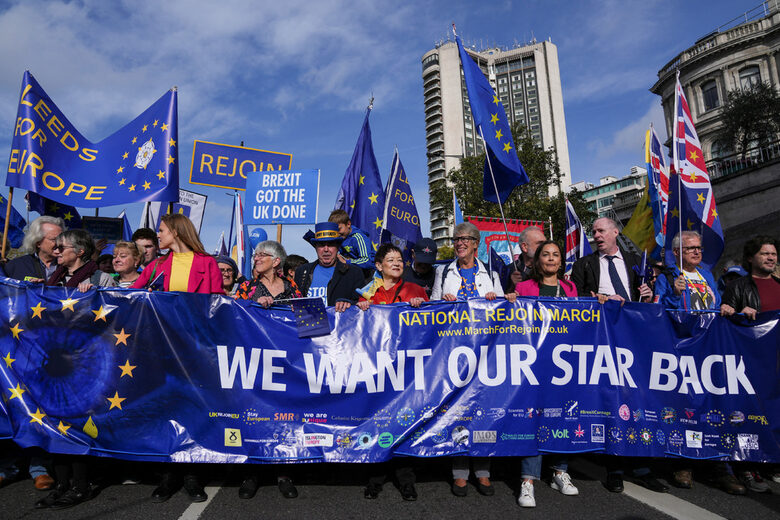 Nikki Ajibade, a 60-year-old teacher from Warwickshire, was at the march with her sister.

She said: "We feel tangibly that the situation we are in now can be traced directly back to the 2016 referendum, which was supposedly a consultative referendum. It was not a supermajority result. 52 and 48 per cent is not something, with which you can just turn the whole country upside down. Look six years later where we are. So we feel very strongly that a sensible government should be formed, a general election should be held now."

The crowd booed as pictures of “Leave” voters such as Boris Johnson, Priti Patel and Nigel Farage were shown on a large digital screen overlooking the Parliament Square garden.

The crowd also chanted "Tories out" and booed when speakers discussed the prospect of Boris Johnson possibly running for prime minister again. Last night he abandoned those intentions.

After Prime Minister Liz Truss resigned last week, the Conservative Party, which has a large majority in parliament and does not need to call a general election for the next two years, must choose a new leader by October 28 - Britain's fifth prime minister in six years.

The race will pit former finance minister Rishi Sunak against Penny Mordaunt. Johnson's decision to ultimately withdraw makes it highly likely that Sunak will be the next UK Prime Minister.