Day 236 of the Invasion of Ukraine: Kyiv under Attack by Kamikaze Drones Two explosions were heard early this morning in the Ukrainian capital Kyiv, AFP reported. This comes a week after Russian strikes against the city. Air raid sirens sounded shortly before the explosions.

The Ukrainian capital Kyiv was hit by kamikaze drones, Andriy Yermak, head of the office of the Ukrainian president, wrote in Telegram.

"The Russians think that this will help them, but these actions look like agony," Yermak also said.

Three explosions were heard in the Ukrainian capital between 6.30 and 7.00 this morning. Shortly before them, the air raid sirens went off.

AFP's @YasuyoshiChiba captured the moment a drone approached to attack Kyiv, and the immediate aftermath of the strikes pic.twitter.com/9Sd1mxgLku

A large fire has broken out at an energy facility in Ukraine's Dnipropetrovsk region after a rocket hit it overnight. The governor of the region, Valentin Reznichenko, announced that the anti-aircraft defense managed to destroy three enemy missiles.

Earlier, the Ukrainian president stated that intense fighting was taking place around the cities of Soledar and Bakhmut in Donbas.

"Russia has again struck the Sumy region. The enemy has hit infrastructure facilities. It is already known that as a result of the enemy attack there are injured people," the chairman of the Sumy regional state administration, Dmitry Zhivitsky, announced on his Telegram page. 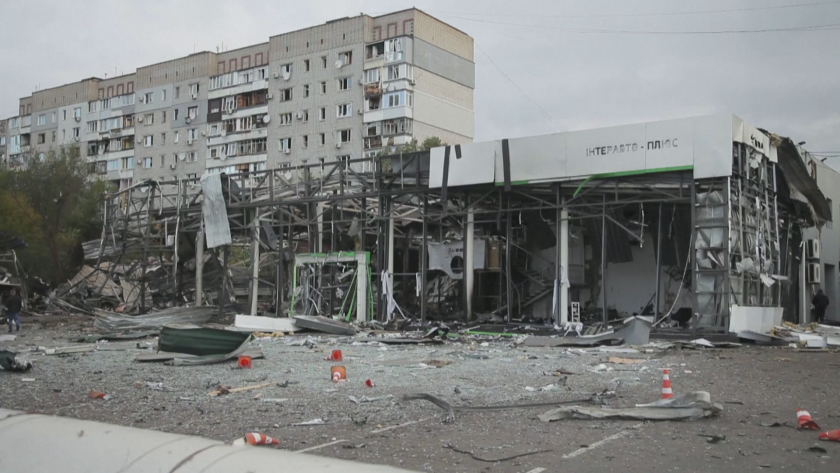 On October 10, Russian missiles rained down on Kyiv and other Ukrainian cities in the biggest wave of strikes in months. The attacks killed 19 people and injured 105 others, sparking international criticism.

The next day, October 11, Moscow launched new strikes on a smaller scale against energy infrastructure in western Ukraine, far from the front.

UNICEF: The war in Ukraine is pushing 4 million children into poverty

Russia's invasion of Ukraine and the resulting economic fallout have pushed four million children into poverty in Eastern Europe and Central Asia, a UNICEF study has found. "Children bear the heaviest burden of the economic crisis caused by the war in Ukraine," the agency said.

UNICEF draws its conclusions based on a survey of data from 22 countries. Russian and Ukrainian children have been the most affected since Moscow attacked its neighbor in February.

"Russia is responsible for almost three-quarters of the overall increase in the number of children living in poverty due to the war in Ukraine and the cost of living crisis across the region, with an additional 2.8 million children now living in households below the poverty line,” says the UNICEF report.

The blow to Russia's economy from Western sanctions combines with the country's large population to produce this massive effect.

"Ukraine is home to another half a million children living in poverty, the second largest share of poor children," UNICEF added.

Romania is third on the list with another 110,000 children in poverty.

"Children across the region have been caught up in the terrible consequences of this war," said Afshan Khan, UNICEF Regional Director for Europe and Central Asia.

"If we don't support these children and families now, a sharp rise in child poverty will almost certainly lead to lives lost, school dropouts and futures lost," Khan said.

The poorer a family is, the more of its income must be spent on food and utilities, leaving less for children's health care and education, the agency explains.

In addition, these children are "more at risk of violence, exploitation and abuse". Poverty could cause 4,500 more children to die before their first birthday and at least 117,000 children to drop out of school this year alone, said UNICEF.

"Everyone turned into beasts": what is happening on the Russian-Estonian border

Since the beginning of the war, thousands of Ukrainians have tried to escape from Russia through Estonia. But they are forced to wait for days, Deutsche Welle reports. "If this is how they treat the people at the borders, what are they doing with the prisoners", they ask.

For many Ukrainians in Russia, fleeing to Europe is more than an arduous journey for which they have to prepare for a long time. It is a struggle for survival.

"Everyone turned into beasts"

After being forced to wait in harsh climatic conditions for six days at the checkpoint on the Russian side of the border with Estonia, Anika realizes that the Russian authorities have completely lost their humanity. "I was crying, sobbing when I saw the little children, how cruel it all was and how in these conditions they all turned into beasts," she says.

When the hostilities in Donetsk and Lugansk began in 2014, and with them came the "Russian world" (Русский мир), Anika (whose name has been changed for security reasons) substituted the village where she lived, located near Mariupol, for the relative calm of the capital Kyiv.

As soon as the war started on February 24 this year, she tried to contact her parents, who remained in Donetsk. After a while, he managed to find them in Moscow, where they fled, because the road to Russia is much easier for those fleeing from the occupied regions.

After spending 10 days in Russia, she left for Estonia, where at least 2,000 people and a long line of cars were waiting at the border.

Ukrainians who want to leave Russia are blocked at the border

According to Anika, Russian border guards deliberately keep Ukrainian citizens in line while letting people of other nationalities across the border. After 4 days in line for those waiting, the conditions become unbearable. "It felt like the temperature outside was 20 degrees below zero. We tried to hide because our hands were freezing," Anika said, describing the crowd standing in the torrential rain that lasted for two days. "All my clothes were wet. I poured a cup of water out of each shoe." Only five Ukrainians were allowed to pass in 24 hours.

The volunteer network "Friends of Mariupol" confirms that in the last week of September, thousands of refugees were prevented from leaving Russia. "The Russian border authorities have imposed much stricter controls. They are trying to catch people, probably men, who are trying to escape the mobilization in Russia," said Alexandra Averdzhanova, a member of the organization's board of directors.

XXI century. "If this is how they treat the people at the borders, what are they doing with the prisoners, with the military personnel", she asks herself. 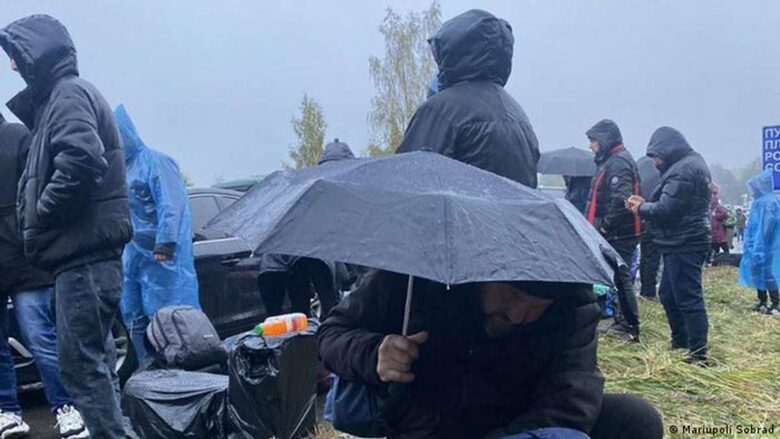 In the summer, volunteers warned that a humanitarian crisis was brewing, as many Ukrainians were not allowed on Estonian territory. Donetsk-born Danilo was visiting relatives in Russia when the February 24 invasion changed his world. He knows he does not have enough money to return to Ukraine.

For five months, the 25-year-old worked illegally to survive and raise funds to leave Russia. Danilo is desperate - in order to work legally in the country, he must acquire Russian citizenship, which he does not want.

In mid-August, the young man decided to try to cross into Estonia through the Narva checkpoint to meet his mother and brother in Germany. "They asked me why I stayed so long in Russia," Danilo says of the Estonian border guards, who three hours later refused to let him into the country because he had left Ukraine before the start of the war. So Danilo had to sleep under the open sky.

After the border authorities offer him to return with documents to prove he is a tourist and have return tickets, he does so, but they again refuse him and send him back. The next day he crossed into Finland without a hitch, even though it meant a much longer journey.

Hundreds of Ukrainians have been denied entry to Estonia

Estonian authorities confirm that at least 1,091 Ukrainians have been refused entry to the European Union through Estonia since the start of the war. In September alone, 306 Ukrainians were refused - three times more than in the first three months of the war.

"One of the reasons for not allowing a person into the country can be endangering public order or national security," said Egert Belitsev, head of the Estonian border control department. Since February 24, about 109,000 Ukrainian citizens have entered Estonia.

"Among those who are denied entry are, for example, people who have been living and working in Russia for a long time and who do not come to Estonia as refugees, but rather as tourists or to visit relatives or friends," says Belitzev.

"We don't let anyone who claims to be Ukrainian"

Although there is no legal basis for this, the Estonian authorities seem to have a different attitude towards men from the occupied Ukrainian regions who they believe have stayed too long in Russia.

Another Ukrainian refugee also told DW that the border guards in Narva refused him entry to Estonia because he had been in Russia for too long. He left Ukraine after the February 24 invasion, but chose the easier option - a two-week trip through Russia to the Estonian border.

"We don't let in anyone who claims to be Ukrainian," said Kaimo Kuusk, Estonia's ambassador to Ukraine. "Two weeks is not considered too long in Russia. We’re talking about more than 10 years."

However, such statements are not confirmed in practice. Estonia's hardline approach fails to take into account the challenges faced by Ukrainians fleeing the war. Volunteers say refugees sometimes need weeks to organize their travel and recover after fleeing war-torn areas of Ukraine.