Since the start of the conflict in Ukraine, Bulgaria has received 782,043 refugees at its borders and has granted temporary protection as per the Temporary Protection Directive of EU, to approximately 136,818 Ukrainian refugees, 87 percent of whom are women and children. 54,579 Ukrainian refugees remain within the country as of 5 October. During the first half of 2022, 1,287 applications for international protection were registered under the Asylum Law of Bulgaria from Ukrainian refugees. During the same period, Bulgaria also witnessed an increase in asylum applications from non-Ukrainian caseloads. Some 8,840 persons applied for international protection with the State Agency for Refugees (SAR), which represents an increase of 288 % compared with the same period in 2021. Most originate from Afghanistan, Syria and North Africa. UNHCR has stepped up its operations and capacity in Bulgaria and is leading the inter[1]agency response in alignment with the Regional Refugee Response Plan (RRP). 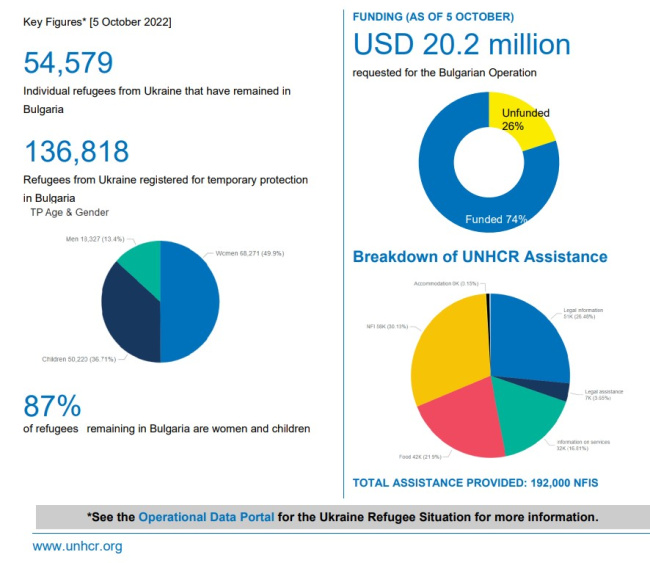 In September, UNHCR observed a sizeable increase in the number of Ukrainians leaving Bulgaria, compared to the previous month. More than 100,000 Ukrainian refugees were recorded to have left Bulgaria between the period 5 September to 5 October. In August, the number of Ukrainians that arrived from Romania nearly equaled the number that was recorded leaving Bulgaria for other countries. That trend has now changed. Currently, there are significantly more departures than arrivals daily. It is believed that the growing uncertainty surrounding the mid to long-term extension of the government hotel accommodation scheme has contributed to the exodus of refugees. In addition, many refugees who have been staying in private accommodation cannot afford to continue doing so. Refugees that are leaving Bulgaria are believed to be returning home to Ukraine, with smaller numbers departing for other parts of Europe. UNHCR believes that refugee movements to Bulgaria via Romania, and especially those of Ukrainians of Bulgarian origin – the Bessarabian Bulgarians – could increase if there is an escalation of hostilities. Bulgarians in Ukraine make up the fifth largest minority in the country and reside in southern Ukraine, namely around Odesa Oblast. While refugees from Ukraine have unhindered access to Bulgarian territory and enjoy temporary protection, non-Ukrainians face challenges in entering the country. UNHCR advocates for equal access to territory and protection for all refugees, regardless of their origin and background.

The government hotel accommodation scheme, which currently hosts some 12,791 persons or roughly 20 percent of all Ukrainian refugees that have remained in the country, has been extended until 31 October following a decision on 14 September by the Bulgarian Council of Ministers. UNHCR has been actively advocating with the Government for a more durable, long-term solution to meet the accommodation needs of refugees, especially with the winter season fast approaching. An estimated 70 percent of Ukrainians who remain in Bulgaria do not currently reside in the Government subsidized hotels or state-owned accommodation centers. However, as their stay in Bulgaria continues, it is likely that many of them may also require winterization support. While there has been a 23 percent reduction in the number of Ukrainian refugees remaining in Bulgaria over the past month, it is estimated that those who will remain during the winter months will be among the most vulnerable. These vulnerable refugees will likely be in need of both material and financial support to be able to survive the winter. 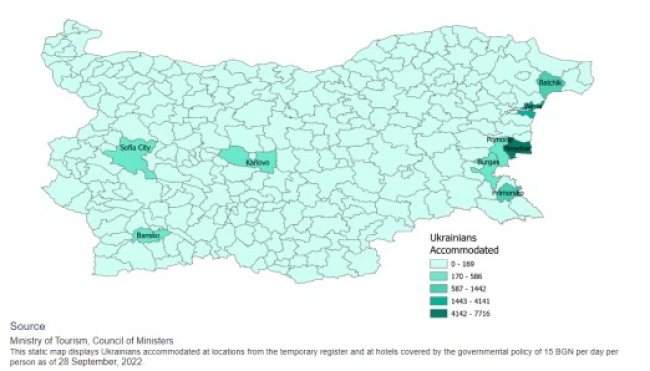 As part of its preparedness actions towards the start of the winter season, UNHCR has stepped up its operations and capacity in Bulgaria. Specifically, UNHCR has prepositioned core relief items such as quilts, pillows, mattresses, kitchen sets, bed linen and hygiene kits with diapers and women and children’s clothing pending delivery. These items will be distributed across all regions in Bulgaria during October UNHCR coordinates the joint inter-agency winterization response within the framework of the Refugee Response Plan (RRP) recalibration.

UNHCR, together with UNICEF and other partners is operating 6 Blue Dots in the cities of Sofia, Varna and Burgas as well as in Ruse and Dobrich close to the Bulgarian-Romanian border, all of which host the vast majority of Ukrainian refugees. Blue Dots provide a safe space, support, and referrals for health care, legal, education and psychosocial support. They bring together critical protection services and information for refugees fleeing the conflict in Ukraine, with a particular focus on children and those at greatest risk, including unaccompanied and separated children, persons with disabilities, cases of suspected trafficking, survivors of sexual or gender-based violence and refugees from LGBTIQ+ community. UNHCR and UNICEF have trained Blue Dot staff and are preparing to deploy the KoBo Collection and Monitoring tool, for monitoring, identification, and referral of persons with specific needs. 28,575 people have received protection support through the Blue Dot initiative in Bulgaria since the start of Ukraine conflict. Additionally, UNHCR is carrying out 31 Age, Gender and Diversity (AGD) focus groups across Bulgaria. These focus groups seek to ensure that all persons of concern (PoC) fully participate in decisions that affect them and are able to enjoy the same rights as anyone else.

UNHCR distributes PSEA posters at Crisis Centres and entry points. Information on PSEA is also included on Bulgaria's newly established help page. UNHCR developed the leaflets and posters on the risks of trafficking jointly with the National Commission for Combating Trafficking of Human Beings.

Four regional training sessions on Risks of Trafficking in the context of the Ukrainian Situation, for community-based and NGO volunteers have been conducted jointly with the National Commission for Combating Trafficking of Human Beings. UNHCR and UNICEF have jointly initiated the mapping of the PSEA reporting channels among the UN agencies. As a way forward, risk assessment on SEA will inform the development of the Joint PSEA Plan of Action.

UNHCR, together with the Bulgarian Red Cross, started rolling out financial, one-time cash assistance, or Cash for Protection programme (CoP) to the most vulnerable Ukrainian households on 2 August in Burgas, where most refugees currently reside. UNHCR is working to increase the number of referrals in Varna and Sofia as well. In addition, UNHCR plans to conduct mobile visits for households with mobility issues. UNHCR anticipates that the CoP will help approximately 10,000 of the most vulnerable refugees currently living in Bulgaria. The CoP will be extended until the end of the winter period.

Economic inclusion enables refugees to provide for themselves and their families and be net contributors to economic development as consumers, workers and entrepreneurs. It is one of the most important keys to enhancing protection and unlocking solutions for refugees. Over the last several months, there has been continued advocacy by UNHCR and efforts by the Government of Bulgaria to assist refugees and to promote their access to livelihoods and economic inclusion. This has mainly been through the Government’s Solidarity Project. 9,167 labor contracts had been signed by Ukrainian temporary protection holders. In most cases, Ukrainian refugees have been able to find low-skilled seasonal employment in hotels, although 65 percent have completed higher education (according to data of the Employment Agency). Lack of childcare, difficulty to legalize diplomas, as well as lack of state support for language classes remain key obstacles to descent employment. Refugees need long-term solutions. UNHCR contributes to these efforts by working together with the public and private sectors as well as the refugees themselves to strengthen refugees’ social-economic inclusion.

Ahead of the new school year UNHCR, together with the Ministry of Education and Science and UNICEF, has initiated a large-scale information campaign on school enrolment for Ukrainian refugees. This was carried out in response to the low enrolment rates of Ukrainian children in national school systems across Europe. Generally, parents have been very reluctant to enroll their children in host countries and UNHCR has thus focused its campaign on communicating the benefits of in-person learning as well as a guide outlining the enrollment procedure in Bulgaria. Videos and information materials have been developed, including vaccination requirements and diploma recognition procedures. For the 2022/2023 school year, 887 enrolment applications for kindergarten and schools have been submitted to the Bulgarian authorities by Ukrainian nationals (as per 3 October); 100 children are already enrolled in kindergarten, while 545 are enrolled in schools. UNHCR, jointly with the Bulgarian School of Politics, has started implementing a project for an advisory board of refugees, whose members will include Ukrainian temporary protection holders as well as refugees with international protection. The project is a continuation of the 2019 Refugee Advisory Board. Approximately 15 refugees will be selected through a competitive selection procedure and will be trained and receive support for developing an advocacy strategy and an action plan for the year. Currently, there is no comprehensive state plan for Bulgarian language classes. UNHCR is providing more than 20 language courses to Ukrainian refugees, for both children and adults, through partners in several locations.