"Alpha Research" Survey: Over 8% Difference between the Two Leading Parties before the Elections

A few days before the vote, GERB is the first political force (25.2%) in the electoral preferences of those who have firmly decided to vote, according to the results of a survey by "Alpha Research", financed with its own funds. During the campaign, the party retained its voters, with a slight tendency towards mobilization and growth of die-hard sympathizers. 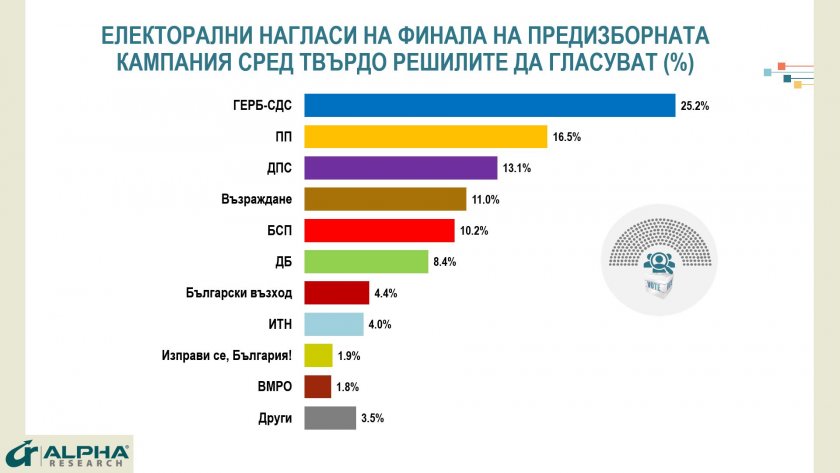 With 16.5%, "We Continue the Change" emerged as the second political force, but it saw a decline in the course of the campaign. There are around the party a fringe of vacillating voters and it can move within wider limits, but with low voter turnout, it can hardly make a significant breakthrough, commented "Alpha Research".

Next come DPS, DB, "Vazrazhdane" and BSP, which are very different in character and dynamics, but the results registered in the last survey are in a relatively small range:

DPS has a potential of 13.1%, as the vote from abroad may be key to its specific position.

"Vazrazhdane" doubles the result of the November elections in 2021. and reaches about 11 percent. The party benefited from the outflow of voters from “We Continue the Change”, “There Is Such a People”, partly from the Bulgarian Socialist Party and the former "patriots". It concentrates the Russophile vote in itself. At the same time, extremely negative sentiments (78%) towards the announced mobilization in Russia are beginning to act as a kind of barrier against this vote. Which of the factors will prove to be stronger will literally be decided in the last days of the campaign.

The BSP managed to maintain its social niche, despite the entry of WCC into it, and can count on slightly more than 10 percent of the vote of the voters. It is also one of the parties that moves in a wider range depending on vote mobilization. The key for her is to convince her older voters to go to the polls and not lose some of them for purely technological reasons, according to sociologists.

Growth in the course of the campaign is noted by "Democratic Bulgaria", and at the end of it the potential support reaches 8.4%. The formation returns some of its voters who voted for “We Continue the Change” in the previous election, but the exchange of voters between them remains quite high and a possible one-way movement to either could cause their percentages to shift.

Bulgarian Rise (4.4%) and “There Is Such a People” (4%) remain on the verge of entering the 48th National Assembly. With both parties, the mobilization of potential voters is relatively low, and the hesitation whether to vote for them or for another political force is high. Their future parliamentary representation may depend on a small number of votes on voting day itself.

In the conditions of predicted low voter turnout (when 1% of voters equals about 25,000 votes), the shift in the positions between the second and fifth places is a very realistic hypothesis, specified "Alpha Research".

Although the difference in the absolute number of votes obtained will not be very large, politically it can be of great importance, both because of the possible coalition configurations and because of the constitutional procedure for the order of mandates.

The national survey of Alpha Research shows that three days before the early parliamentary elections, Bulgarians remain polarized and very skeptical about the possibility of forming a regular government after them. The vast majority of Bulgarians wish to form a cabinet, but apparently, the positions and behavior of the parties in the election campaign emit opposite messages. Which, among other things, demotivates not a small part of citizens to go to the polls, concludes "Alpha Research".

*The research was conducted in the period September 27-29, 2022. by "Alfa Research", is published on the agency's website and is implemented with its own funds. The survey was conducted among 1,025 adult citizens from all over the country. A stratified two-stage sample with a quota according to the main socio-demographic characteristics was used. The information was collected through a direct standardized interview with tablets at the homes of the respondents.

Surveys and predictions on the elections so far:

"Trend" Survey: What are the Attitudes of Bulgarians Days before the Elections