Mayor of Karlovo: The Damage from the Floods is over 60 Million Levs

According to preliminary data, the damage from the floods in the three most affected places in Karlovo region is over BGN 60 million. This was announced by the mayor of the municipality, Emil Kabaivanov, on Nova TV. However, he emphasized that the figure is probably not final, as there is no way to cover all the damage in a few days.

More than 340 houses have varying degrees of damage. Six of them are completely destroyed, and more than 60 are uninhabitable. The residents of these properties currently live with relatives and friends.

A total of 378 families need support from the Social Assistance Agency. The lists will be ready today.

Seven bridge structures and more than 10 smaller bridges connecting villages in the region were swept away.

Kabaivanov is adamant that before the storms that swept away the houses and infrastructure, the rivers there were cleaned. "Every year we allocate funds to clean these little creeks. And I'm not an expert on logging. The Minister of Agriculture promised to go together high up in “Sredna Gora” mountain to see to what extent it is deforested", the mayor also said.

How the help the people from Karlovo region who are in need check here. 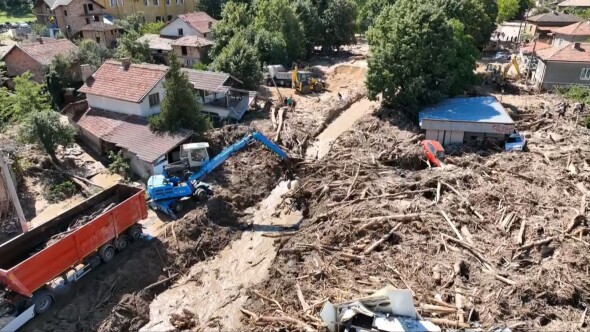 The clearing of the damage from the natural disaster that submerged Karlovo region continues. On the fifth day after the floods, more than 600 volunteers helped the affected areas. However, the situation remains critical.

An official donation account has also been opened. An SMS with the text "DMS KARLOVO" can be sent to the number 17 777. To date, nearly BGN 80,000 has been collected. A report on how the money was spent will be published every week.

The mayor of the village of Bogdan, Hristo Ivanov, said on Nova TV that all victims of the natural disaster have been accommodated with relatives and friends, and at the moment there are no people without a roof over their heads. "The only positive thing is that there are no victims or injured," Ivanov said.