Day 191 of the Invasion of Ukraine: IAEA wants to establish Permanent Presence at Zaporizhzhia NPP The Bosphorus Strait is closed to vessels in both directions because of a stuck cargo ship carrying grain from Ukraine to Italy. This was announced by the Turkish Coast Guard Directorate.

The 173-meter-long Liberian-flagged “Lady Zehma” ran aground after getting stuck near Istanbul's Bebek Bay. The Directorate of Coast Guard has started a rescue operation. 6 tugboats have been directed to the vessel, the directorate reported.

Due to the malfunction, the movement of ships in the Bosphorus has been suspended until the completion of rescue operations.

Earlier this week, the Joint Coordination Center led by the United Nations, Ukraine, Russia and Turkey after reaching an agreement on grain exports said this vessel had permission to sail from the Ukrainian Black Sea port of Chernomorsk to Ravenna in Italy

Grossi: The physical integrity of the nuclear power plant in Zaporizhzhia has been violated

The physical integrity of the Zaporizhzhia nuclear power plant in southern Ukraine has been "compromised", said today the head of the International Atomic Energy Agency (IAEA) after his visit to the NPP.

IAEA chief Rafael Grossi brought a team of inspectors to the Russian-controlled plant, which has come under frequent fire in recent weeks, raising fears of a nuclear accident.

"It is clear that the plant and its physical integrity have been breached several times," Grossi told reporters after returning with part of his team to the Ukrainian-controlled zone.

"I was worried, I am worried and I will continue to worry about the plant," he said, adding, however, that the situation is now "more predictable."

"We spent four or five hours there. I saw a lot, and my people are there too, we managed to go around the entire site," Grossi said of the long-awaited inspection.

He said part of his 14-member headquarters mission would remain at the site "until Sunday or Monday, continuing with the assessment."

"We will continue our presence there, especially some of my experts. We have a lot of work there to analyze some technical aspects," Grossi said.

He did not specify how many people would remain at the site, adding that "we can prepare a statement on a number of issues and initial observations, initial assessments, and they will dig into that so we can have a comprehensive report. The situation this morning was quite difficult," he added.

"There were times when the fire was very noticeable - heavy machine gun fire, artillery, mortar attacks two or three times, we were very concerned," Grossi said, describing the security situation during his visit.

However, he noted that the mission had received "wonderful support from the UN security team".

"I think we have shown that the international community is there, can be there and will continue to do so," Grossi said.

The Zaporizhzhia nuclear power plant - Europe's largest nuclear facility - has come under repeated fire in recent weeks, with Kyiv and Moscow blaming each other for the attacks, raising fears of a possible accident.

US institute: Putin has not given up on erasing Ukraine from the map

New statements by Vladimir Putin confirm that his maximalist plans for Ukraine remain unchanged, the Ukrainian news site HB reports today, citing a new report by the American Institute for the Study of War.

Experts at the institute point to Putin's words during a meeting with schoolchildren in Kaliningrad on September 1, in which he said that the purpose of the war (called a "special military operation" by the Kremlin) was to "eliminate the anti-Russian enclave" in Ukraine. In his words, it represents a threat to the existence of the Russian state.

This claim is similar to his initial concept of "Ukraine as anti-Russia", which Putin announced shortly before the invasion, motivating the start of the war.

Such a current position "confirms his maximalist intentions towards Ukraine and is likely intended to create an informational basis for a call for further Russian efforts and the generation of additional forces in the fall and winter," the institute's analysts said.

They also note that, according to the General Staff of the Armed Forces of Ukraine, Putin has extended the "deadline" for Russian troops to retake Donetsk region from August 31 to the "extremely unlikely" date of September 15, and Russian troops are now redeploying forces in an attempt to achieve this goal. However, the institute considers it "unlikely" that Russian forces will make the progress in Donbas necessary to capture the region by September 15, even despite the transfer there of parts of the Russian army's Central Military District, as reported by the Ukrainian command.

At the same time, the Kremlin is likely trying to boost the morale of the Russian military and the demotivated forces of the self-proclaimed "Luhansk and Donetsk People's Republics" (L/DPR) by exaggerating their only success in recent weeks - the capture of territories around Donetsk, which they have been fighting for since 2014.

Indeed, after the capture of Lysychansk, Russian forces failed to advance towards Seversk or capture the E40 highway leading to Sloviansk and Bakhmut.

Russian military bloggers continue to claim, in the institute's opinion baselessly, that the Ukrainian counteroffensive in the south has already failed. According to American experts, this will be a long operation that may take weeks or even months, and in it Ukrainian forces may take false maneuvers to deceive the enemy for the purpose of the real strike.

At school with the anthem: Putin ordered Ukrainians to learn that they were in the USSR

Russian President Vladimir Putin on Thursday stressed the importance of teaching a Kremlin-approved version of history, saying many children in eastern Ukraine do not know that Ukraine and Russia were once part of the same country, the Soviet Union.

Vladimir Putin met with students from across Russia in a classroom in the Russian exclave of Kaliningrad for the "Let's talk about what's important" lesson that kicks off the school year across the country, Reuters reported. He repeated to the students that he was forced to send troops to protect the Russian-speaking population in eastern Ukraine.

In an hour-long question-and-answer session broadcast on Russian state television, the president said he was shocked to learn that children in eastern Ukraine did not know their country was part of the Soviet Union, as was Russia, and that fixing that pass is a priority task.

Putin called the wave of protests that forced Ukraine's pro-Russian president Viktor Yanukovych during the Orange Revolution in 2014 a "coup".

"Everybody thinks that today some kind of aggression is coming from the Russian side but nobody understands, nobody knows that after the coup in 2014, the residents of Donetsk, a large part of Luhansk and Crimea did not want to recognize the coup," Putin said. "A war began against them - and it was fought for eight years." 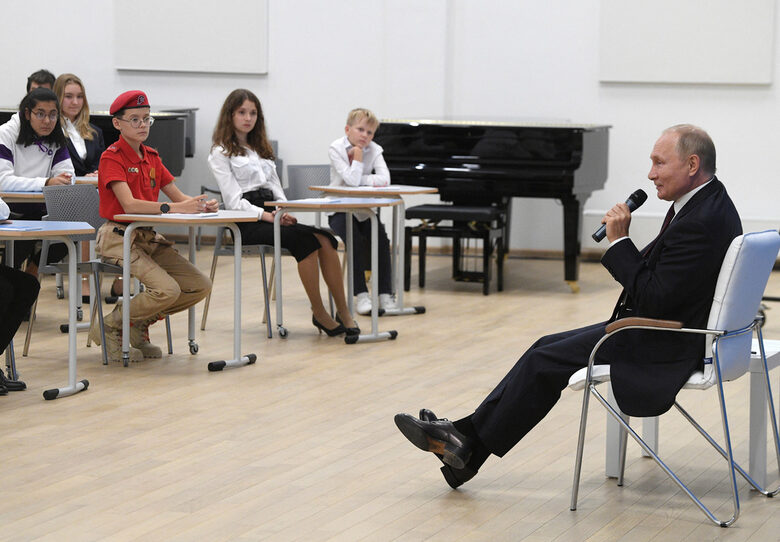 Kyiv and its allies dismiss the idea that Russian speakers in Ukraine have been persecuted as a baseless pretext for Moscow to try to seize territory from Ukraine and oust President Volodymyr Zelensky.

President Putin said it was important that schools in Russia and in Russian-occupied parts of Ukraine teach the Moscow-approved curriculum - which largely denies Ukraine's sovereignty and history as an independent nation since 1991.

Since the invasion of Ukraine, the Kremlin has demanded that schools be more patriotic: from Thursday, all students start the week with a flag-raising ceremony and a performance of the Russian national anthem.

After the lesson, Putin also took part in a board meeting of a new youth group created by the government, which is based on the traditions of the Soviet-era Komsomol and pioneers. The group, which does not yet have a name, is another attempt to create an all-Russian youth movement. The previous attempt was unsuccessful and the group "Nashi" (Ours) was disbanded. At the peak of the movement at the beginning of the century, it had more than 100 thousand members, Reuters recalls.

Vladimir Putin's visit to Kaliningrad comes amid serious tension in the exclave, which is located on the coast of the Baltic Sea between Poland and Lithuania - NATO countries. Last month, Lithuania suspended the transit of some Russian goods to Kaliningrad, implementing European sanctions over the war in Ukraine. After protests and threats from Moscow, the EU asked Vilnius to allow rail supplies, except for weapons, to pass through its territory.