The stock price of gas on the ICE Futures site has fallen almost 20% so far, according to trading data. The price of September futures at the TTF hub in the Netherlands, which determines the pricing of the continent, as of 12:30 p.m. fell by 18.7%, reaching €275.8 for 1 MWh, or 83.83 per thousand cubic meters.

The last time European gas traded below $2,900 was less than a week ago, on August 24. Over the next few days, the price of a thousand cubic meters of gas at ICE rose sharply to $3,521.

Today's biggest intraday drop since April came as stock players rushed to take profits after key news from Germany and activity was thin because UK markets were closed for a bank holiday. Economy Minister Robert Habeck said storage facilities could be 85% full next month - faster than the planned filling of storage capacity.

EU storage facilities are almost 80% full, the capacity target as of 1 October.

"We're still getting a lot of LNG, pipeline gas, storage is full in many countries or close to it and demand is down because extremely high prices don't make sense," a European gas trader said, quoted by Reuters. European gas storage is 79.4% full - on track to reach the 80% target by November 1.

"The closer we get to fully filling gas supplies, the more the impulse to raise prices will be cooled," said analysts at Engie's EnergyScan. 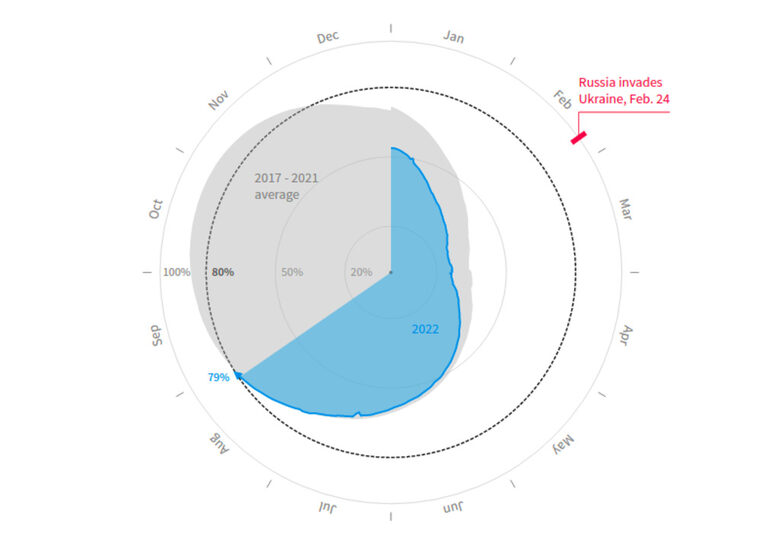 A Reuters chart shows the pace at which gas storage in Europe has started to fill up since Russia's attack on Ukraine.

Gazprom will halt natural gas supplies to Europe via Nord Stream 1 for three days from Aug. 31 to Sept. 2 for maintenance, prompting concerns that they may not resume after that.

"The curve is being pushed up by some traders who hope that there will be no gas flows through Nord Stream 1 after the maintenance and hedging around this hypothesis. For now, the price is being pushed up, although the energy of this process is running out," the gas trader said.

Habeck said on Monday that he expected gas prices to drop soon as Germany made progress on its storage targets and would not have to pay the high prices currently on the market.

European gas prices rose this summer as electricity prices also rose during a heatwave. The drought, which has caused water levels in rivers to drop, has forced European countries to produce less electricity from renewable sources, while demand for it has increased due to the increased operation of air conditioners.

Another reason was the suspension and then the resumption, at even smaller volumes, of the transportation of gas on Nord Stream 1.