• Only 28% of companies involved in Russia denounce its invasion of Ukraine.

On the 6-month anniversary of the invasion of Ukraine, the Moral Rating Agency has released a report on corporate statements about the invasion. The study reveals a small portion of corporations have the guts to denounce Russia. The corporate watchdog’s main mission is to expose companies for the degree to which they have cut ties with Russia. This latest report focuses on words, and whether words match actions. The MRA’s ratings on corporate involvement in Russia are disclosed at MoralRatingAgency.org. The MRA’s ‘Courage Index’ classifies statements denouncing Russia as ‘courageous’. ‘Cowardly’ communications cover statements that are ‘mealy-mouthed’, contain alternative excuses that don’t refer to the invasion, show solidarity or increased involvement with Russia, or cover companies remaining silent about the invasion. 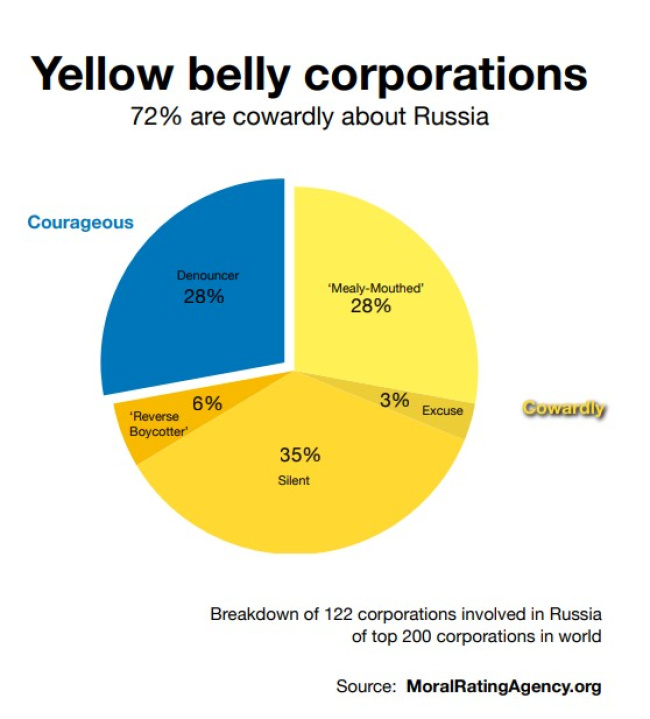 The 88 cowardly corporations, which the MRA calls ‘yellow bellies’, account for 72% of the 122 largest companies involved in Russia (122 of the top 200 corporations in the world had trading and/or investment activities in Russia at the time of the invasion). The 34 companies denouncing Russia accounted for just 28% 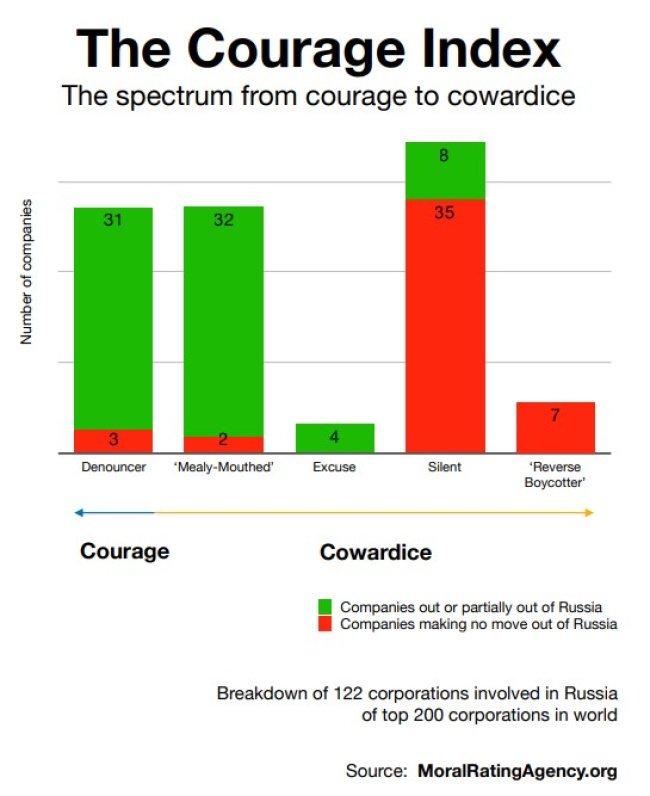 Mark Dixon, founder of the MRA, said, “There are a lot of temptations to be a corporate chicken and not call out Russia. We believe the main driver among those leaving Russia is to keep their options open in the future if there is a ceasefire. Companies know they will burn their bridges if they denounce Russia or Putin. They are acting commercially not morally.” Companies still in Russia generally find it too hypocritical to speak up. “Companies opt to denounce Russia for two reasons. Some put morality above money. Others think they won’t be going back to Russia while Putin remains in power and decide to profit from the moral kudos of speaking up. We don’t care if a company denounces Russia out of moral outrage or the commercial benefit of looking moral. The important thing is that Russia should be universally considered a pariah.” The most common response from yellow-bellied companies was a ‘mealy-mouthed’ statement (32 cases). Companies making a move out of Russia that don’t want to confront Russia directly chose this type of watered-down wording. Such statements refer to the war being tragic or a humanitarian disaster without citing Russia as the invader or otherwise admonishing the regime. It is noteworthy that these 32 companies, which were forced to reduce ties because of world criticism of Russia, didn’t voice any criticism of Russia themselves. For example, HSBC said, “Our thoughts are with all those impacted by the continuing conflict in Ukraine”; Dell said, “It's a great tragedy and very disappointing to see a humanitarian disaster”; and Chevron CEO Michael Wirth spoke about the "tragic situation" in Ukraine (Reuters) while the company retained its shareholding in the Caspian Pipeline Consortium which transports Russia oil to world markets.

There were four cases of companies explaining their exits from Russia with reasons such as supply chain problems. There were seven cases of companies classified by the MRA as ‘reverse boycotters’: showing solidarity with Russia by increasing involvement with the country or making supportive statements. For example Tencent, which owns WeChat, issued a statement admonishing users who commented on the invasion on the grounds it undermines a “clean cyberspace”; Saudi Aramco’s shareholder Crown Prince Mohammed bin Salman showed commitment to OPEC Plus, where Russia is Saudi Arabia’s main partner; and China National Offshore Oil, China National Petroleum and Sinopec moved in the reverse direction of boycotts by discussing the purchase of Shell’s stake in Sakhalin-II. 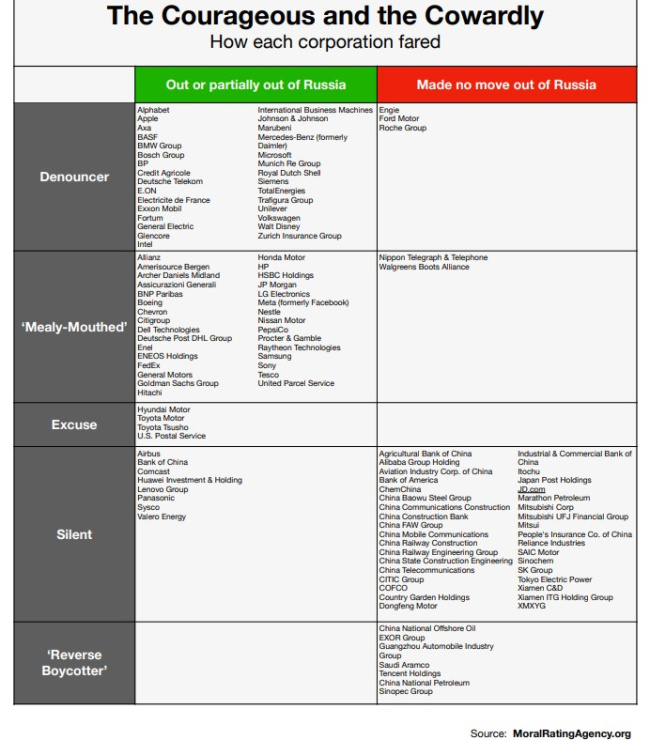 Silence, as would be expected, was the choice of companies not making the move out of Russia. However, it was also the choice of some companies making partial exits from the country. Airbus, Comcast and Panasonic moved as quiet as a mouse. Even Sysco and Valero Energy, which cut all links with Russia, did so quietly. The rare Chinese companies that did make partial withdrawals from Russia – Bank of China, Huawei and Lenovo – expectedly followed the same approach.

Mr. Dixon said, “Moving out of Russia without saying a word is the depth of cowardice. When a company slips out silently, or otherwise avoids the elephant in the room, it undermines the exodus momentum by diluting peer pressure. Global consensus is fragile and must be strengthened at every opportunity. Our position is that words matter, and silence is complicit.”

34 companies denounced Russia, some of which showed significant moral courage. Shell said, “Shocked by the loss of life in Ukraine, which we deplore, resulting from a senseless act of military aggression which threatens European security”. Microsoft said, ”Like the rest of the world, we are horrified, angered and saddened by the images and news coming from the war in Ukraine and condemn this unjustified, unprovoked and unlawful invasion by Russia”; and added, "Like so many others, we stand with Ukraine in calling for the restoration of peace, respect for Ukraine's sovereignty and the protection of its people”. Microsoft’s suggestion that much of the world was likewise denouncing Russia was optimistic since the MRA found that only 28% of companies spoke up properly, putting Microsoft in the minority of companies doing so. Shell’s strong statement within days of the invasion deserves special credit. Mr. Dixon said, “Shell is the 14th most exposed company in the world to Russia. It took a moral stand even though it had a lot to lose. Putin’s July 1st degree to expropriate the Sakhalin II gas and oil project from Shell and others wasn’t a mere coincidence.”

Chickens with little to lose

Mr. Dixon continued, “The corporations with yellow bellies often have negligible exposure to Russia. The coward with nothing to fear is the most cowardly of all.” The MRA accused the following companies, which made some moves out of Russia, of being cowards with negligible risk: Allianz, Chevron, Generali, Deutsche Post DHL and P&G all made ‘mealy[1]mouthed’ statements, US Postal Service made excuses, while Sysco remained silent. The low exposure level of the companies is shown at MoralRatingAgency.org.

There were three cases of companies denouncing Russia which remained involved with the country. It is unclear if they were hoping to get credit for words rather than actions. In any case, the contrast between words and actions is stark. Importantly, all three companies used the word “invasion” in their statements.

Ford Motor retains its ownership in car production and hasn’t made any plans to divest, despite saying it was “deeply concerned about the invasion of Ukraine and the resultant threats to peace and stability”.

Engie continues to import Russian gas and LNG, yet it said it “condemns the invasion of Ukraine and expresses its support for the affected people”.

Meanwhile, Roche Group continues to export to Russia, but said it “vehemently condemns the violent invasion of the country.” 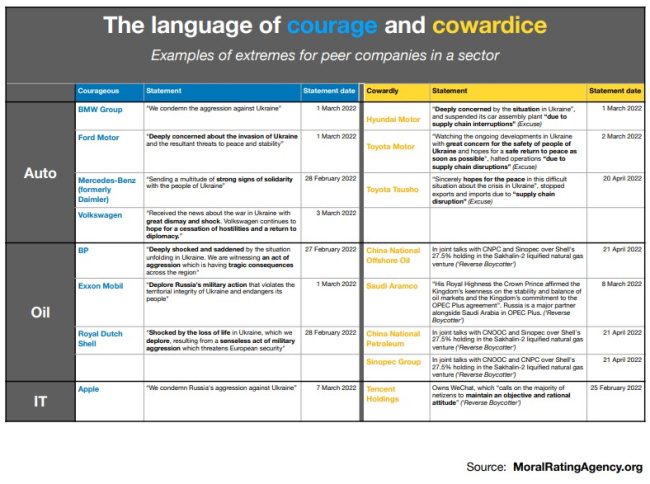 While most of the cowards among Western companies opted for ‘mealy-mouthed’ statements, East Asian companies (Chinese, Korean, Japanese) tended to opt either for silence, making excuses or even ‘reverse boycotting’. Indeed, the topic of the invasion appears entirely off-limits in China and, in other Asian countries, it seems acceptable to avoid it.

In cases where a corporation issued several statements about Russia, the MRA classifies the company on the basis of its statement.