Bulgaria surprises in a Survey of Emotions around the World Afghanistan is the country with the most negative emotions in 2021, and in the second-ranked country, Lebanon, almost half of respondents regularly experience anger.

These are some of the conclusions of the Global Report on Emotions, prepared by "Gallup" and published last month. In the report, it is also striking that Eastern Europe is hardly present in the top list, with two exceptions: Ukraine - fifth in the list with the least positive experiences, and Estonia, Latvia, Russia and Lithuania - in the top six in the list of countries with the most slightly negative.

Other Eastern European countries (including Bulgaria) are absent from the lists of the 15 worlds with the most or least positive or negative experiences in the world. There are answers for Bulgaria; they simply do not contain extremes, not even in negative emotions, although a study by "Gallup" from ten years ago pointed out precisely Bulgarians as the most emotionally repressed in the world.

Where are the Bulgarians?

71% of Bulgarians felt pleasure the day before the survey (with 27% "no") and this puts Bulgaria in the top half of the table. 62 of the respondents felt "rested" - in the bottom half, 89% of people regularly felt they were treated with respect. Closer to the bottom and based on cases, they answered that they smiled or laughed a lot - 71%.

Closer to the bottom is the share of Bulgarians who learn interesting things: 47% answer with "yes", 52% - with "no". In the immediate vicinity are Myanmar, Mali, Iraq, Bosnia, Armenia, Laos, Israel and North Macedonia.

If in terms of anger, sadness and anxiety, Bulgaria is rather in the middle of the table, in terms of stress, Bulgarians are in the lower half, around India, Bosnia, Austria, Taiwan, Paraguay, Hungary, Germany, Tajikistan and the United Arab Emirates.

And the question of whether they experienced pain puts the respondents in Bulgaria rather at the bottom of the table (26% - "yes", 74% - "no").

The sinking of Afghanistan

Bulgaria is absent from the general lists of the countries with the "most positive" and "most negative" emotions, as it does not enter the top 15, but is usually towards the middle of the list.

Afghanistan has replaced Iraq as the country with the most negative emotions in the world, in the year it was taken over by the Taliban 20 years after they were ousted from power. Gallup reports that worry, stress and sadness hit record highs in 2021: 80% of respondents in that country felt anxious, 74% stressed, and 61% sad most of the day before being interviewed. 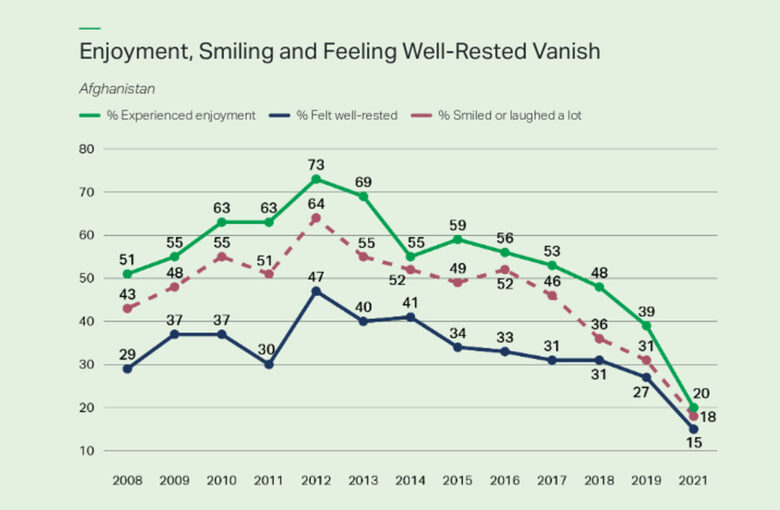 Afghanistan is also the country with the least positive emotions for years (followed by Turkey and Lebanon), but its result in 2021 is not just a new low for the country itself, but also since there have been surveys (16 years ago). The Taliban's takeover of the country limits the possibility of any positive emotions. "The percentage of Afghans who said they had fun, smiled, learned something interesting or felt rested the previous day fell to record lows," Gallup continues.

At the other pole - as countries with the most positive experiences - is Panama, followed by Indonesia, several Latin American countries (Paraguay, El Salvador, Honduras, Nicaragua), Iceland, the Philippines, Senegal, Denmark and South Africa.

Anger in the Middle East

Lebanon's place as the angriest country is not surprising: the political and economic crisis has spilled over into the coronavirus epidemic, in an outpouring of anger over the explosion at the Beirut port, subsequent grain shortages and a supply hit over the war in Ukraine.

The Gallup report found that 49% experienced anger regularly, including the day before the survey. Followed by Turkey and Armenia, Iraq, Afghanistan and Jordan.

By comparison, Bulgaria is rather in the middle of the table: 16% say "yes", 84% - "no" to the question of whether they regularly experienced anger. 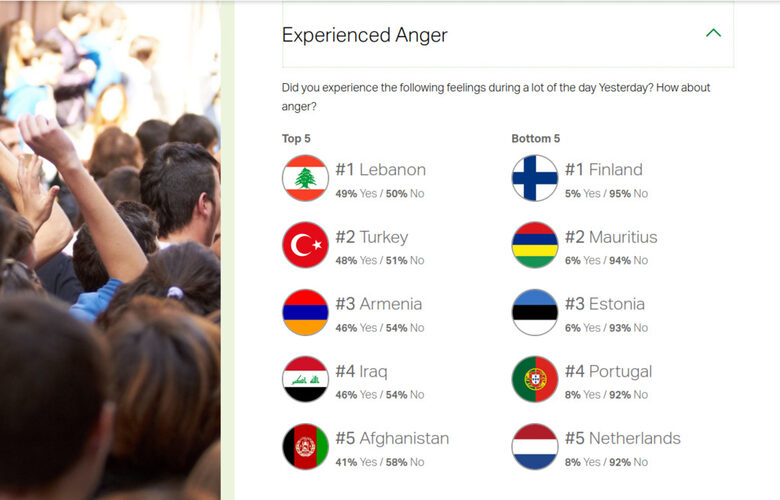