"Economist": A Recession in Europe is Inevitable, Bulgaria will be among the Most Affected Recession in Europe in the winter of 2022-2023 due to the energy crisis is now inevitable. Bulgaria will be one of the countries that will suffer because of the shrinking demand for its products in the EU. As well as because it stands out as an economy with very inefficient production processes, consuming a lot of energy - two and a half times above the average for the European Union, and this is very expensive.

This is the conclusion of the "Economist Intelligence Unit" in a report from last week, predicting that gas imports from Russia will not recover even with a cold winter and failed European solidarity - slow or blocked sharing of gas reserves between member countries - the EU economy will shrink.

Even if countries cut consumption, high energy prices will cause serious damage. This will also be felt in countries that are not dependent on Russian gas (Spain and Great Britain, for example), for which the EIU adjusts downward the expected growth by between 0.5% and 1.5% of GDP.

For Bulgaria, there is a worsening of inflation expectations. After almost 17% in June - the highest in 24 years - analysts expect it to continue to accelerate in the third quarter and the high cost of energy (+37.5% growth in transport costs and +18.5% in household bills) and the increase in the price of food (+23.8%) are key factors for this. The trend was towards slowing down the growth of inflation, and the state softened the effect for both businesses and citizens, until the Energy and Water Regulatory Commission approved in July another increase in the price of electricity and central heating.

Again, because of the high gas prices for Europe, there will be a significant correction of the inflation forecast in Bulgaria next year - from 4.7% to 6%. (with a forecast of 2022 to end with an annual 14.1%). 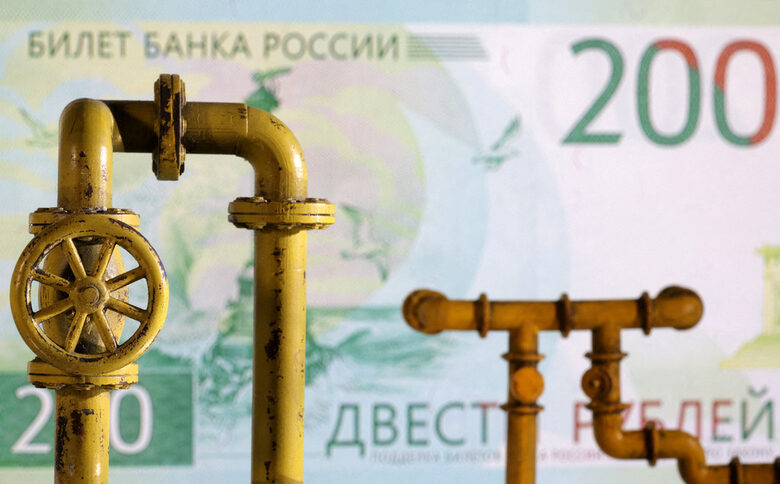 The analysis of what lies ahead in European energy is increasingly bleak:

Winter gas consumption in the EU since 2014 has varied between 130 bcm and 148 bcm. The EU currently has around 79 billion cubic meters in storage - just over two-thirds of its total capacity. In the event of a severe winter, more countries will face gas shortages. 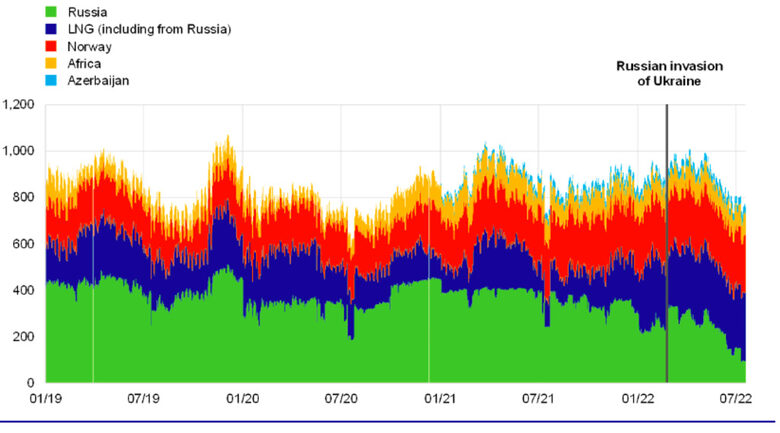 *Natural gas imports to Europe are falling. The chart is from a report by the European Central Bank, including data (in million cubic meters per day) as of July 19 by Bloomberg and calculations by an ECB team. Russian pipeline gas is in green. In blue is the import of liquefied natural gas, including one from Russia.

Efforts to replace Russian gas via other pipelines and with liquefied natural gas (LNG) have produced some results but cannot go much further in the short term given the limited availability of global LNG supplies and a shortage of regional regasification terminals. On the demand side, Europe's gas needs will be squeezed by both the EU's plan to cut demand by 15% and the impact on consumers of much higher prices. However, we expect some countries to be unable to meet their gas needs this winter, particularly Germany, said the EIU, part of the group that publishes the Economist magazine.

The sharing of gas (it was finally approved on Friday by the so-called supermajority of 15 EU countries without the agreement of Poland and Hungary - ed.) would limit the economic damage for the countries most exposed to the gas and energy crisis, but the agreement to cause domestic scarcity to help a neighboring country would be unpopular. The countries most at risk will still have to make difficult policy decisions to further reduce demand. These could include shutting down industrial production, imposing even higher prices and even outright restrictions on the use of heating in households, which is currently a protected sector. 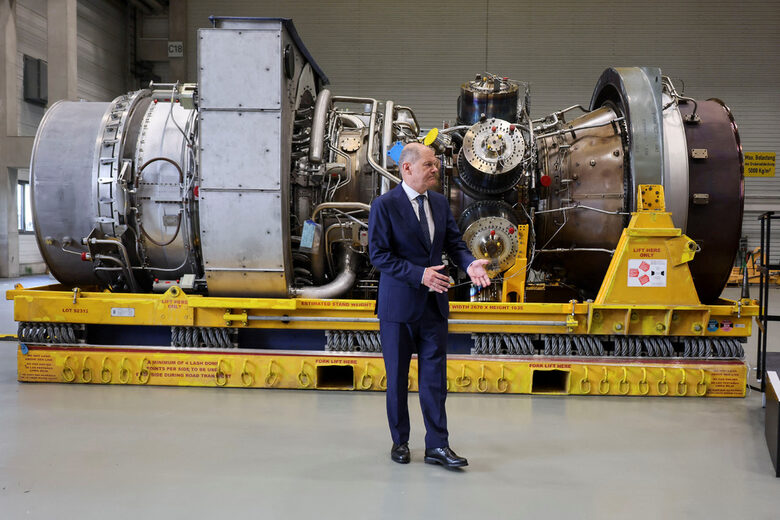 *Chancellor Olaf Scholz in front of the turbine for the Russian compressor station, because of which "Gazprom" drastically reduced the supply of gas to "Nord Stream". According to Berlin, the unit can immediately leave for Russia, according to Moscow, there were still some ambiguities with the documents.

Klaus Mueller, the head of Germany's grid operator, said at the end of the week that by December, people in the country will have to give up at least 20% of their current energy consumption. Germany will also have to reduce its gas exports to neighboring countries by 20% and import 10-15 gigawatt hours of gas to avoid a shortage. On calls by regional politicians for gas extraction through fracking, Mueller replied in an interview with "Welt am Sonntag" that this would not solve the problem of the gas deficit in the next two winters, in which Germany will continue to be dependent on Russian gas.

Germany's goal is to have its gas storage facilities 95% full by November 1. If Vladimir Putin shuts off the gas supply entirely, Europe's largest economy will somehow make it through the winter, but then it will have a huge problem filling storage for next winter. Households are protected, but Mueller reminded that this does not mean they can heat up uncontrollably. "In order to save jobs, I think that restrictions in private households are also completely justified," he added.