The World’s Most Expensive Painting Sold at Auction Is Missing, and the Louvre Abu Dhabi Isn’t Panicking When the world’s most expensive artwork ever sold at auction was purchased at a Christie’s sale in November 2017, the art world was a little confused. The painting, Leonardo da Vinci’s Salvator Mundi (Savior of the World), went for $450 million to Saudi Prince Bader bin Abdullah bin Mohammed bin Farhan al-Saud, an ally of the Crown Prince Mohammed bin Salman. But in the year after the record-breaking sale, a year in which the Saudi royal family has been in the news for more unsavory reasons, the painting receded from view. Due to premiere at the Louvre Abu Dhabi in September 2018, Salvator Mundi reportedly has been missing since at least this past fall.

Thought to be the last known da Vinci painting in private hands, Salvator Mundihad a sordid history in the 20th century. In 1958, the painting sold for about $60, as it was then considered to be painted by Bernardino Luini, a da Vinci follower. Over the years, critics have had their eyebrows raised about whether the painting is really a da Vinci. It was rediscovered in the U.S. in 2005, restored in 2007, and then studied at the Metropolitan Museum of Art and by other scholars in the following years. In 2011, it was part of the blockbuster exhibition Leonardo da Vinci: Painter at the Court of Milan at the National Gallery in London. Russian businessman Dmitry Rybolovlev acquired the painting afterward from a Swiss art dealer, and Rybolovlev’s family trust later put it on auction at Christie’s in 2017. The going price quickly spiked to $450 million after a telephone war between two anonymous bidders, one of whom was later revealed to be Prince Bader. 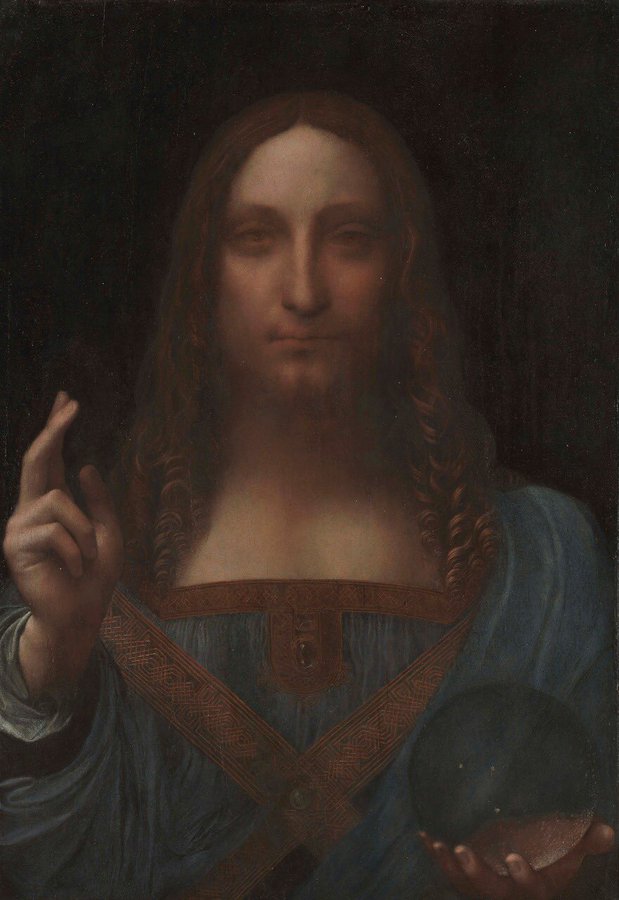 The Louvre Abu Dhabi was set to premiere the painting on September 18, but about two weeks before that date, the unveiling was postponed. Via a tweet, Abu Dhabi’s Department of Culture and Tourism stated that more details would be announced about the postponement of the unveiling—but since then, there has been no news of the sort. In a twist worthy of Dan Brown, the painting’s exact location has been reportedly unknown for at least a few months, mysteriously, but it does not appear that the museum has sought public assistance for the painting’s recovery. Vanity Fair has reached out to the museum and has not received an immediate response.

Naturally, the disappearance has led to reams of speculation. The Guardian notesthat the condition of the painting itself has been under question; there seems to be an issue of over-restoration that has left the painting with noticeable streaks, as Thomas Campbell, the ex-director of the Met, alludes to on Instagram in November 2017. The week of the sale, New York magazine’s senior art critic, Jerry Saltz, claimed the art world was whispering about a hoax.

Why are we writing about all this now, you ask? Because last week, the Web site Narativ published a report—based on the notion that the lost painting could be of significance to the F.B.I.—that went viral. The post, written by Trump-Russia blogger and news producer Zev Shalev, may have been picked up because of two details that do reflect previous reports. Compared to the work’s previous sale price of $127.5 million in 2013, Prince Bader may have wildly overpaid. In addition, Rybolovlev, who paid $95 million to purchase Donald Trump’s Palm Beach home in 2008, has been questioned in Monaco regarding corruption and influence peddling. (Per Reuters, his lawyers in Russia declined to comment on whether he was being questioned by police, and said, “We request that the presumption of innocence in relation to Mr Rybolovlev is strictly respected.”) Neither Prince Bader nor Rybolovlev has commented on the painting since its was pulled from the Louvre Abu Dhabi’s schedule, and the White House has previously denied that Trump has any ongoing connection to Rybolovlev.

It’s a strange story, and one that might naturally attract the more conspiracy-minded Internet denizens. Offline, there has been little panic of the sort that normally occurs when famous art disappears. So as of yet, there are more questions than answers.